2015 review, angels/demons, indie, magic, purchased by me, skip it 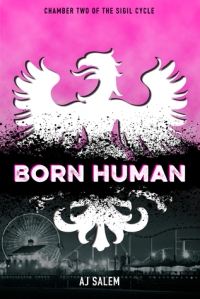 After nearly unleashing hell on Earth, Gemma Pope is focused on one thing only – living a normal teenage life. But when a troop of tanks roll into Harrisport and a group of white coats start tinkering with a second chamber with intentions of prying it open, Gemma is forced to decide if she wants back in the game. Can Gemma let sleeping dogs lie and brush off more than one past betrayal?

Son, I am disappoint.

The first book was a fun little paranormal YA romp. This book had some promise, but two problems common to indie titles completely derailed this book.

First, the book is just too short. The estimated page length for this book was all of 173 pages. The first book was 310. You really do miss those extra 140 pages. Those pages let the story breathe, gave her place to develop characters. This book it goes from event to event to event, and that’s it. Don’t both reading this if you didn’t already <i>Almost Demon</i> because you’ll be completely lost. It seems the plan is for seven books, but I’m not entirely sure there’s enough plot to sustain a series of that length. Not every series needs to be that long, and I much rather a series be a really well developed trilogy than a stretched out septet.

The other major problem? This book is not properly edited. There were formatting markers left in. She used italics for telepathic conversations and I found at least one instance where she forgot to italicize. Conversations didn’t properly introduce characters, so it was difficult to tell who Gemma was talking to, and in bits of dialogue the pronoun for the person speaking would inevitably be capitalized. It was odd and incredibly distracting. I could go on, but I think I’ve made my point: this book was not ready to be published. I’m forgiving of a few minor copy errors here and there, but it’s just too much here.

As for the story, it’s fine. Gemma finds out that no matter how much she might wish ignoring the problems would make them go away, they don’t, and soon enough it’s back to summoning demons, this time to try and prevent the start of the apocalypse. There’s a twist at the end that isn’t really a twist if you’ve read enough books in the genre.

I enjoy the first one and was looking forward to this one. I don’t think I’ll be proceeding from this point. Technical issues aside, I really didn’t like how breakneck this book was, and I suspect that won’t be changing going forward.

I’m really am bummed that this had to be this way. I really do love finding and sharing great indie titles and this just isn’t one.